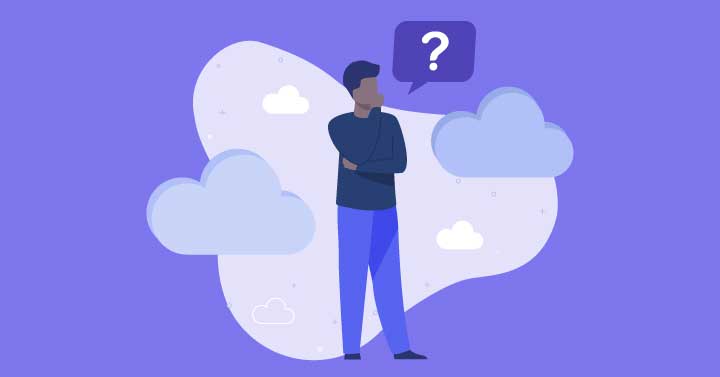 New technology comes with new vocabulary, and it’s easy to conflate concepts and use words interchangeably. But when it comes to the cloud, detail is crucial because it’s a multi-layered, dynamic, and innovative concept – even though many of us take it for granted.

Business leaders are increasingly on board with cloud transformation and all it can offer their companies. But navigating cloud infrastructure and services and making informed decisions requires technical knowledge about the crucial tools for digital transformation success. That starts with knowing the difference between “cloud” and “cloud-native” systems.

What is the Cloud?

It’s easy to think of the cloud as intangible since the metaphors we employ to describe it suggest just that. However, the cloud is the same thing as an internet server. Storing something “in the cloud” means transmitting it over the internet to a server somewhere in the world so you can access it from anywhere. Many companies use services like Amazon Web Services (AWS), Microsoft Azure, or Google Cloud (GCP) for this very purpose, though other vendors provide simpler versions of the cloud.

The alternative is storing it on a hard drive or physical server that has to be maintained on the premises by an IT team, or at a dedicated data center off-site. By migrating from physical servers to the cloud, companies move responsibility for running, maintaining, scaling and securing their systems to their cloud provider.

Some legacy systems – those not built for the cloud – can be migrated to the cloud, making them “cloud-enabled.” But that’s only the case when they’re not heavily reliant on local systems and hardware. Cloud-enabled applications will have the same underlying architecture but can be reconfigured to use virtual resources. Legacy systems, however, can’t take advantage of all of the cloud resources that would make them scalable and let them integrate into more modern cloud applications.

Some systems can go beyond cloud-enabled to become “cloud-based,” providing more scalability without a complete redesign. In this case, a company can move in-house applications to cloud platforms, eliminating their responsibility for managing the resources behind an application (such as servers and backups). Applications can scale up with demand, resulting in companies paying only for the cloud resources they use. Unfortunately, this can get expensive if an app wasn’t built specifically for the cloud.

What is Cloud Native?

Cloud-native applications are both built and deployed in the cloud. Not only do these apps require no physical computing infrastructure from the companies that utilize them, but they are also optimized at every stage to leverage cloud resources and take advantage of the processing power of distributed computing.

There are significant advantages to cloud-native applications. This type of cloud transformation is built for the maximum utilization of cloud computing platforms such as AWS or Google Cloud Platform, meaning they can take advantage of all the flexibility, scaling and security benefits of the cloud. Cloud-native apps offer optimal containerization, portability, faster deployment times, and vastly improved scalability, which are integral in our world of fast-paced digital transformation. According to a 2022 report by Tigera, 75% of companies are now focusing on developing cloud-native applications.

Of course, some institutions with strict privacy and compliance requirements (such as banks and other financial institutions) can’t simply place their entire computing infrastructure on a public cloud network, so cloud-native solutions also include “multi-cloud” and “hybrid cloud” options. This also necessitates a flexible cloud infrastructure that allows cloud-based applications to be moved from on-premise to cloud, and from one cloud platform to another.

Cloud native solutions can run across public, private, and hybrid cloud environments, but they may lose features if transferred entirely to another platform. That means businesses that need to transfer applications from AWS to Google Cloud Platform, for example, need to go a step beyond cloud native to “cloud-agnostic” applications.

What is the Difference Between Cloud and Cloud Native?

It’s clear that we can’t simply use “cloud” to describe an application adequately. There are far too many differences to consider between cloud and cloud native applications (not to mention cloud-enabled, cloud-based, cloud-agnostic, etc.). That means companies entering the cloud space need to decide the extent to which they want to upgrade (or replace) their legacy systems.

Typically, the first decision in deciding on a cloud transformation initiative is deciding between moving legacy systems to the cloud or moving to a cloud-native solution. Keep the following factors in mind:

Implementing legacy systems in the cloud can be complicated and time-consuming. Hardware provisioning and migration, software setup, and future upgrades all need to be considered. On the other hand, cloud native applications don’t require hardware, and there’s no specific software to deploy either. They’re made for the cloud, so implementation only requires starting them up.

Cloud-enabled and cloud-based solutions require tweaks as services expand and downtime while upgrades occur. Cloud-native apps are built to be scalable, flexible, and upgraded without service interruptions.

In general, migrating to the cloud saves companies money because they no longer have to maintain physical servers and many platform providers offer a pay-for-your-use model. But cloud native solutions are generally cheaper because they only require licensing and storage costs from the beginning and are never responsible for hardware costs before or during deployment and testing.

First, there’s the obvious fact that cloud-native services were designed for the cloud while cloud-enabled and cloud-based services were not. Cloud native apps may also employ a microservice architecture that allows for services to be compartmentalized so that parts of the app can undergo development, testing, updates, troubleshooting, and deployment without requiring large-scale downtime.

Deciding on a Cloud Migration Strategy

Gartner estimates that by 2025, more than 95% of new digital workloads will be deployed on cloud native platforms. In response to these needs, Indellient has partnered with Google Cloud to build next-gen cloud native applications to maximize agility and modernize core systems.

Companies seeking to upgrade their legacy systems, make data-driven digital transformation decisions, harness the benefits of scalability, and optimize operations while keeping costs down can schedule a demo or consultation with Indellient to explore their system migration needs.