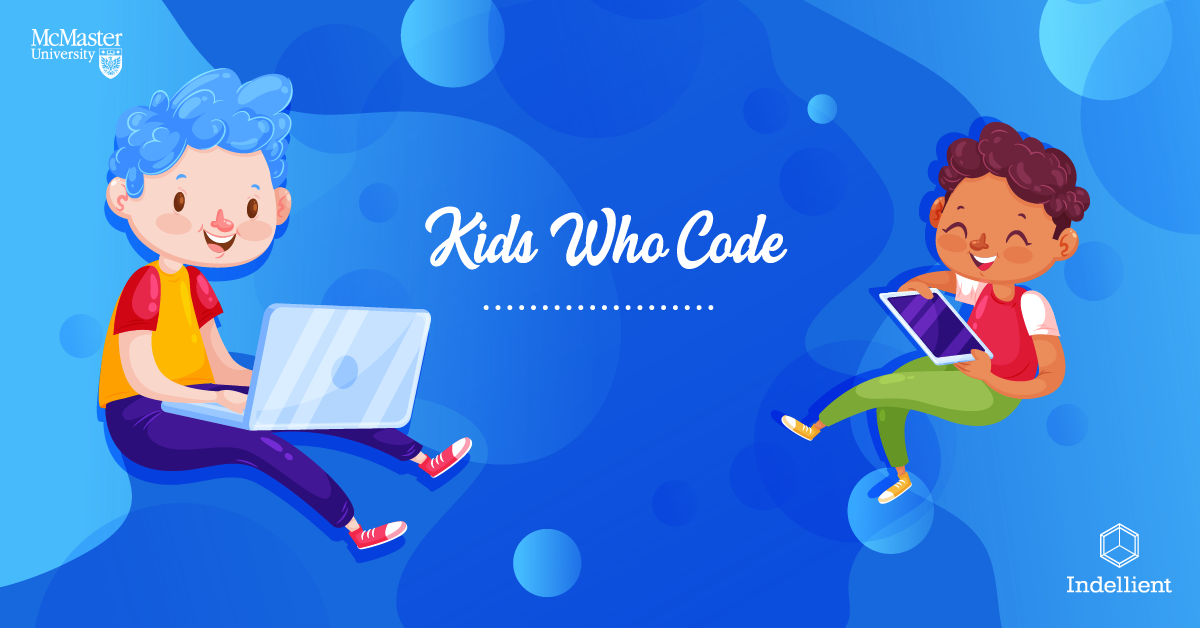 “Design-thinking”, “cognitive science” and “application development” may not come to mind when thinking about summer camp programming for a group of fifth to eighth graders, but that is exactly what Dr. Christopher Anand of McMaster University had done during a 4-week camp this past summer.

Throughout this camp, the group of 5th to 8th graders had the opportunity to interview a group of 3rd graders from another camp, formulate a storyline, and design and implement a multi-player math game. “I think it’s important to simplify software development” says Anand, a computer science professor at McMaster University. “A program like this encourages kids to think about a career in software, we think it’s important to say, ‘kids like you can build a game like this’”.  The camp was free-of-charge thanks in part to a grant in which Indellient is proud to have contributed to. “As a former McMaster Alum, I became aware of the work Dr. Anand is doing. Indellient is more than willing to help give children the opportunity to build, experiment and get hooked on a career in software development,” says Christopher Venantius, Indellient’s Vice President of Data Services and Operations.

How did this project get its start?

Last year, Yumna Irfan, a 3rd year Integrated Biomedical Engineering & Health Sciences student and President of the Start Coding Club volunteered with Dr. Anand to teach kids programming. They co-wrote a research paper on whether teaching kids programming would improve their math skills. This project led to the development of the summer camp program. Additionally, as a researcher, Anand had a scientific interest in whether we can better use computer science to make it easier to build apps. “If we can develop better abstractions, and people are able to think about things more easily, this will reduce the problems with apps like bugs or other unexpected problems with the design.”

The summer camp was completed through McMaster’s outreach program which provides elementary school kids a fun and safe environment to learn code. Anand mentioned that this age range brings many great opportunities. He expands on this by mentioning “students in grades 5 to 8 happen to be in a real time of change; they approach things differently, are much freer in giving opinions, are not afraid of making mistakes, and have a lot of patience and free time.”

How did the camp work?

At the beginning of the camp, the younger group created the framework of the game while the older group refined and polished the work previously completed. To explain further, the younger kids started the project by adding a small number of questions into the program. This resulted in seeing the same questions each time you played the game. From here, the older group figured out how to randomly generate questions and include a larger list of questions which introduced more difficulties in coding.

Beyond the coding aspect of the camp, there were many other outlets for creativity including the development of characters within the multi-player math game. The younger group had several ideas about what kind of characters should exist, and as a result, they did most of the visible design. “I was surprised by how interested some of the students were in learning, even for some of the really challenging concepts like back-end development…even some undergrads don’t understand it, but some of the kids were so interested in learning more” says Irfan.

What’s next for the program?

“Undecided. A lot of the students want to do it again and so do their parents, so there is a chance to create a “sequel” camp that offers new challenges” says Irfan, “however, a lot of the teachers want the camp to be offered again to students who were too young to participate last time.” Regardless of what is yet to come, the camp was a success, and it is thrilling to know that we have a highly intelligent group of up and coming developers.

If you are interested in getting involved with similar programs, McMaster University students are encouraged to join the Start Coding Club. Reach out to Yumna Irfan directly to learn more. To contribute financially to the program, please visit reach out to Dr. Anand.

Hi there, I’m Natasha Makovora. I’m a Social Media & Employer Brand Specialist at Indellient. I work alongside our Marketing and Human Resources teams to build brand awareness, improve the candidate experience, strengthen talent pipelines, and engage employees. In my spare time, you can catch me spinning at Hustl + Flow or SoulCycle, binging new TV shows or playing with my nephews.