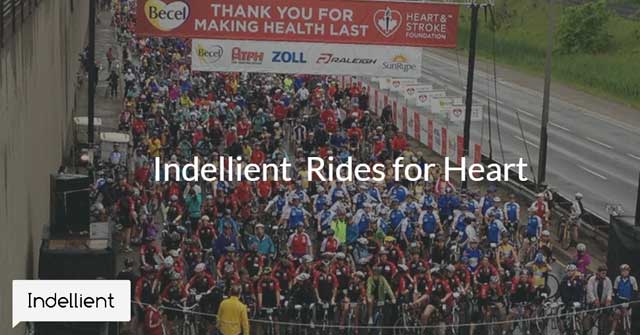 On Sunday June 4th, Indellient team members took to the Gardiner Expressway to ride away with a crowd of over 1, 500 people who gathered together to support the Becel Heart & Stroke Ride for Heart initiative – one that I have been supporting for over 10 years.

Our five-person team consisted of Jon, Jena, Zichen, Matthew and myself. The team members collectively raised $5, 661 for Heart and Stroke research, a very impressive total and the most the Indellient team has raised thus far!

The process started in April when snow covered the roads and bicycling was not anyone’s first thought. The team got together and came up with some ways to raise money including a bake sale, item auctions and just plain donation requests. Indellient agreed to match donations up to the corporate limit and so the fundraising began!

Once the snow was all gone and the rain subsided, we started to do our training. The team had each individually set goals for the ride itself, which can be done over 25, 50 or 75 kilometres. To do the training we all hit the road in the area around our Oakville office to do progressively longer training routes. As the weeks passed by and the temperatures went up, our training rides got better and better!

On the day of the ride, however, the weather turned against us and it rained all morning – from light showers to pouring rain – but this did not dissuade our intrepid team!

Everyone did their best and covered the distance they promised… except Jon! Jon set out on a BMX bicycle to do 25 KM. For those that don’t know, a BMX bicycle is meant for doing tricks and not for distances! These bicycles have a single gear and you can’t really sit down for extended periods. The rain got in Jon’s eyes and he missed some signs and he ended up doing 58 KM in 2½ hours! An impressive feat!

It was a rainy day in the city – but that didn’t stop the Ride for Heart.

Our victory medals speak for themselves.

By 10 AM the ride was completed and the team all convened at the event finish line! Because the team raised more than $1,000 per person, the team was declared a VIP team and became eligible for a scrumptious (free) lunch, specialty coffee and free massages!

Indellient’s Ride for Heart team was tired, wet and cold, but nevertheless happy to have raised funds to advance Heart and Stroke research and make a difference!

To read about our Big Bike ride to support the same initiative, click here.

Sean Forbes has been a Managing Systems Analyst at Indellient since 2015 and specializes in large scale integration and data analyses projects. He has been doing the Ride for more than ten years and wants to thank all of the people who supported him!

I am Sean Forbes, the Director of Enterprise Solutions at Indellient. I have a passion for helping clients leverage the considerable investment they have made in gathering enterprise data. My many years of experience allow me to help our clients evolve architectures that are efficient and consistent across projects. I lead a great multidisciplinary team of professionals whose dedication to quality leads to very happy clients.